Posted on March 21, 2014 by walkableprinceton 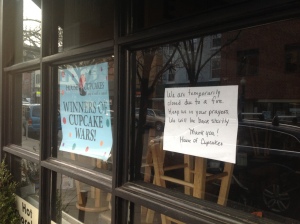 A sign at Princeton’s ‘House of Cupcakes’ on Witherspoon Street shows that the store is closed after a recent fire. (click to expand.)

A recent fire at Princeton’s famous ‘House of Cupcakes’ on Witherspoon Street resulted in the evacuation of six nearby downtown apartments. Fortunately, there were no injuries to residents, although many commentators were surprised that the six apartments were home to no fewer than 41 residents. But why the surprise?As we have been pointing out for some time, there is far greater demand for downtown apartment living than what is provided in the Princeton housing market. Zoning constraints prevent the addition of new apartments, meaning that people who choose to live downtown have several options: pay a huge price, or squeeze in with a bunch of friends. For many low-wage workers in Princeton, the first option isn’t possible, so living with 6 friends or family members in cramped conditions becomes a way of life. 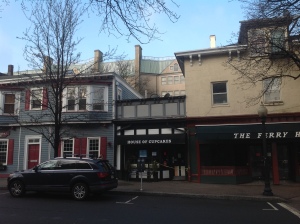 Apartments on Witherspoon Street next to ‘House of Cupcakes’ provide homes to many residents. (Click to expand.)

Princeton could, and should, reform zoning  to enable a more functional housing market that provides a greater supply of cheaper apartments and better availability of affordable units. But Council seems unwilling or unable to do so. Right now, a project that would bring hundreds of new apartments and 56 affordable units to Witherspoon Street is in limbo because Princeton Council is dithering over signing a developer’s agreement. The reasons are clear: some residents don’t like having new homes added next to their existing houses. The same concern fueled opposition to a proposed renovation at 255 Nassau Street last year, which led to a proposed apartment plan being rejected by the Zoning Board. Residents should have their say on redevelopment projects, but routine down-zoning leads to a broken housing market that punishes those of limited means.

Whereas Princeton offers a myriad of choice of places to live for millionaires, those at the bottom of the pyramid- and even most middle-class families- have few reasonable housing options in town. The cramped conditions in apartments on Witherspoon Street (and throughout the John-Witherspoon neighborhood) are just one manifestation of a housing affordability crisis. Many more people who work in Princeton instead choose to ‘drive to qualify’ by finding cheaper accommodation in nearby townships and driving into town every day. This is a major cause of Princeton’s regular traffic snarls. Providing more housing choices in-town would surely take some portion of cars off our roads during rush hour. It’s a choice that would make Princeton a better place to live, and which would support the town’s purported commitment to social diversity.

Are you surprised that 41 people were living in 6 apartments in downtown Princeton? Where should they live if not in crowded apartments on Witherspoon Street? Have your say in the comments section below.