Tiger Trees Of The D&R Canal Trail In Princeton, NJ

Posted on December 5, 2013 by walkableprinceton 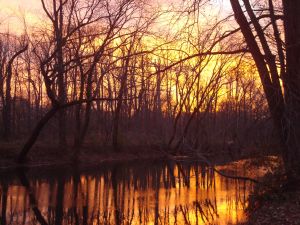 View of the D&R Canal from the towpath trail in Princeton, near Alexander Road. (click to expand.)

This post is part of a series where we celebrate the many beautiful and characterful sights of Princeton, NJ. You can find previous entries in this series here and here or by searching our site for posts tagged ‘beautiful walkable Princeton’.

We previously wrote about how the D&R Canal Greenway should be a model for other parks in Princeton. It is extraordinarily beautiful to watch as the seasons change here, surrounded on either side by the waters of Lake Carnegie and the D&R canal itself. We spotted these trees on a recent walk along the towpath, which, silhouetted by an early winter sunset, appeared like the stripes of a tiger. At the very same time, Princeton University’s football team were playing Dartmouth in the frozen wastelands of northern New Hampshire, aiming for a historic sweep of the Ivy League. Could it be mere coincidence that nature took on the hues of the local College football team at this pivotal moment??

Either way, it didn’t make much difference, as Princeton lost, but still retained a share of the Ivy League. Students celebrated with a huge bonfire on campus, which was very appropriate, not just for upholding tradition, but for staying warm on a freezing night!

What do you think are the most beautiful sites of Princeton? Let us know in the comments section below!