Remember When We Predicted Sub-$3 Gas Around Princeton? Well Here It Is.

Posted on November 11, 2013 by walkableprinceton 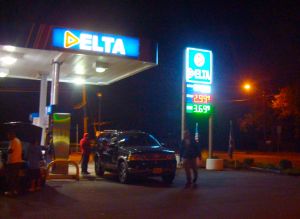 Here it is: that sub-$3 gas that we predicted back in May. (click to expand)

Back in May, we wrote an article predicting that the price of gas would fall and potentially drop below the magic $3 / gallon barrier. This was based on observations about trends in global oil prices. We saw this as an opportunity to revise the New Jersey gas tax to a sustainable level, because increased taxes would be offset by decreasing prices. Not everyone agreed. Over at our Facebook page, one commenter rejected our idea because “the price just rose 6 cents overnight here. I question if it will ever dip below $3.00 a gallon. We need no more taxes thrusted upon us.”

Well, here we are at the start of November, and what do you know? The price of gas is down, and we’re regularly seeing sub-$3 gas near Princeton (see photo above*). So what’s not to like? Cheap gas is good, right? That’s certainly what Governor Christie thinks. Although he refuses to raise the gas tax, Christie is borrowing more to fund transportation than his predecessor, John Corzine. This despite Christie canceling the ARC Tunnel project and siphoning off Turnpike tolls that were supposed to pay for it. We’re going to be stuck paying off this debt for years to come. This isn’t a party political issue- it’s a question of not dumping the next generation with the costs of unnecessary debt service. In fact two Republican State Assemblymen voted against Christie’s transportation budget, because it called for so much borrowing.

Cheap gas encourages people to live further away from where they work. If you can get a bigger house by driving an extra 10 minutes, that’s a deal that many people will go for- as long as gas is cheap and roads are not too congested. Of course, the more people make this decision, the worse the traffic gets, leading to pressure for more taxpayer-funded road projects. These road projects are really, really expensive and right now the gas tax isn’t enough to pay for them.

Governor Christie recently popped up in nearby Hillsborough, celebrating how a new road parallel to 206 would relieve congestion. It’s very debatable that a new road will have that effect. Instead, it will make it more likely that remaining green spaces in Somerset County will be developed as sprawl housing, meaning even more traffic, and saddling the New Jersey taxpayer with the costs of maintaining another road for generations to come. Traffic isn’t bad because we haven’t built enough roads. We’ve built hundreds of miles of roads, yet traffic still stinks. The problem is our land use. We keep building low-density housing on fields instead of walkable housing in towns. Housing is so spread out that it’s almost impossible for most of us to get to work in reasonable time by walking, bicycle or transit. And all this is incentivized by artificially-cheap gas.

In the future we must prioritize non-car transportation. We don’t want more traffic and we don’t want the extra taxes required to build and maintain roads for car-dependent housing. But if the state does need money for roads, that money really ought to come from the gas tax, not borrowing. We shouldn’t be using our tax code to subsidize people to drive further and use less fuel-efficient vehicles. Christie will be gone by the time people realize that the gas is cheap because he used other tax sources to pay for roads. Use the gas tax to pay for road construction and maintenance. After all, is that not what a gas tax is for?

– What do you think? Should cheap gas be the #1 priority of any self-respecting Jersey politician? Is cheap gas a public good? Or is it ‘welfare for drivers’? And what about traffic…is it caused by low-density housing? Or is it all the fault of Princeton eco-heads who blocked the Somerset Freeway? Speak your heart using the comment box below!

1 Response to Remember When We Predicted Sub-$3 Gas Around Princeton? Well Here It Is.