What The Dinky Can Learn From James Bond’s Aquatic Car

Posted on October 21, 2013 by walkableprinceton

James Bond’s aquatic Lotus Esprit (left) from ‘The Spy Who Loved Me’ may be a model for future transit opportunities along Princeton’s Dinky (right) rail right-of-way. (click to expand)

(Mild spoiler alert-contains scene reveals that will absolutely not ruin the enjoyment of the movies discussed.) Back in the days before Michael J Fox jump-started a heavily modified DeLorean using a 1.21 Gigawatts lightning bolt, the coolest car in the world was James Bond’s white Lotus Esprit from the 1977 movie, ‘The Spy Who Loved Me‘. In addition to a legendary power ballad theme song sung by Carly Simon, the movie features an amazing sequence where Bond (played by über-1970s man, Roger Moore) is chased in his car by a particularly terrifying adversary. Running towards a cliff at high speed, Bond appears done for, but he survives driving into the sea when his car becomes a submarine. 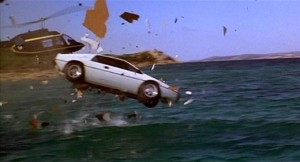 The ability to adapt to two different transportation environments is the defining feature of a ‘dual-mode vehicle‘. Bond’s submarine Lotus Esprit is a special example, as it can operate on roads and underwater, but other examples exist. For example, a hovercraft has advantages for amphibious landing based on its ability to transition seamlessly from sea to land. 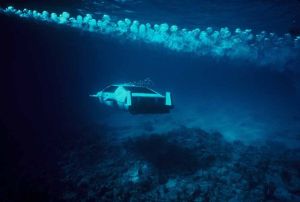 Haha! The baddies were not expecting this! (click to expand)

At the present time, Princeton’s historic Dinky line faces an uncertain future. Its railroad right-of-way has been cut back by Princeton University, who placed a higher premium on expanding their facilities over maintaining the existing transit station. But Princeton needs more transit, to facilitate car-free and car-lite living. Moving the train further away from the town is a burden on local residents, the majority of whom live north of Nassau Street, far away from the proposed new Dinky Station. The risk is that fewer people will ride the train because of its distance from the town, leading to increased traffic, and potentially endangering the long-term sustainability of the line.

Things are looking up for Bond thanks to his dual-mode vehicle. (click to expand)

Extending a heavy rail train line to Nassau Street was recently ruled out by a committee established to examine transit alternatives along Alexander Street. It seems that the Dinky in its current form will never be able to get up to the town. But residents are very skeptical about replacing the train with a bus. One potential solution is for the Dinky to become a ‘dual-mode vehicle’, capable of using rails along its existing right-of-way, and then converting to road tires so that it could travel further north into downtown Princeton. It would require a different train/vehicle, but the present Dinky Arrow I train only dates from the 1970s. Several kinds of locomotives have historically ran along the Dinky tracks (for example, here is a picture of PRR MP54 rolling stock used in 1977 – can you spot the difference from the current Dinky train?)

Such vehicles in fact already exist. Toyota has invested heavily in building a train-bus hybrid, that can switch from regular rubber tires to rails in a matter of seconds. Could this be an answer for the Dinky? Hard to say, the video below makes the technology look a bit clunky, but it’s definitely an option worth keeping in mind. As coolness goes, it’s not exactly James Bond, but we live in the real world and have to look for the technology that offers the greatest benefit to potential local transit users!

What do you think is the best solution for future transit along Alexander Street? Leave your comment using the box below.