Could 15mph Speed Limits Be On The Way To Princeton? 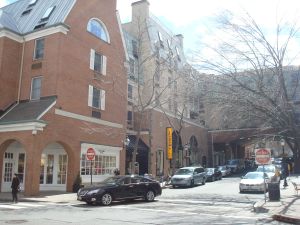 Cars and walkers share many Princeton roads and streets. Would a 15mph or 20mph speed limit improve safety?

A bill working its way through the New Jersey State Legislature proposes to enable municipalities to enact lower speed limits on local roads. The proposed new law, which was introduced March 21, 2013 by Assemblyman Scott Rudder and Assemblywoman Celeste Riley, recently moved through the transportation committee on an unanimous vote. Part of the text of the bill reads as follows:

“This bill would require the Commissioner of Transportation to designate a 15 or 20 miles per hour speed limit on all residential access streets within a community or neighborhood, upon the request of the community’s association or a majority of the residents in the neighborhood, with the approval of the appropriate governing body.”

In practice, this would mean that a Princeton neighborhood could petition the Traffic and Transportation committee to limit the speed limit to 20 mph or even 15mph! However, the bill is limited to communities or neighborhoods where the majority of streets do not have sidewalks, and is further limited to residential access streets. Nonetheless, a glance at the Princeton sidewalk map shows that several areas in Princeton North, the Western Section, Washington Oaks, and off of Rt 27 heading towards Kingston meet these criteria. Theoretically, if this bill passes, some of these neighbors will soon have the option of enacting significant reductions in speed limits in their areas!

Of course, speed limits only make a difference if the police enforce them, and it’s not clear that is a priority for Princeton’s police. We would also argue that traffic calming, that is, changes in road design that discourage excess speed, is a far more effective way of managing speeding cars in residential neighborhoods.

What do you think? Would 15mph or 20mph speed limits be a good thing for Princeton? Would they increase safety? Please leave your thoughts in the comment box below…

This entry was posted in Local, Princeton, Traffic. Bookmark the permalink.