Meet The New Jersey Guy Trying To Walk Across the USA!

Alex Hrebin, who is attempting to walk across America, via whereintheworldisalexsandiego.wordpress.com

Updated 6.5.13: We made some changes to this piece based on info from ‘J.P.’ in the comments section!

Every now and again, you come across a story so bizarre that it takes you away from your daily work and makes you think. For us, the story- if you can call it a story- of Alex Hrebin , is one of those events. Mr Hrebin is a native of Oxford, NJ. At some point in April of this year, he set out to walk across America. You can follow his travels at his blog here.

Alex passed through Princeton around April 24, just before Communiversity. At that point, he apparently had sore feet. That is concerning, because he still had approximately 3,000 miles to go! Last we heard from him, Alex was heading west from Millmont, PA, about half-way across the Keystone State. We trust that the lack of updates in the last week or so merely reflects the lack of things to report in western Pennsylvania, and does not indicate some bad tidings that have overtaken his trip!

It’s not clear why Alex is walking across America. We previously reported about how the New Jersey Freewalkers are walking from Trenton to New York City. That’s a long walk, even if you take it in stages, but this guy is going a whole lot further. The scale of the expedition brings to mind Lewis and Clark, the famous explorers, or perhaps Forrest Gump, who ran across America ‘for no particular reason’. However, Alex is following in the footsteps of many other long-distance walkers. On Wikipedia, you can find a list of over 70 people who have walked, or attempted to walk across America. This quest has become somewhat easier in recent years, since the completion of the American Discovery Trail, a 5,000 mile route of various trails and by-ways that stretches ‘from sea to shining sea’. The America Discovery Trail was first walked in its entirety by retirees Ken and Marcia Powers in 2005. 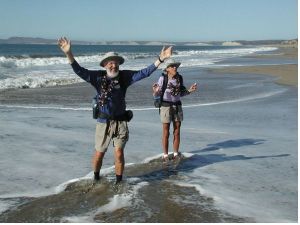 Ken and Marcia Powers celebrate in the breakers of the Pacific Ocean after walking the length of the American Discovery Trail. Via trailjournals.com

Most people walking across America have some cause in mind, for which they are sometimes trying to raise money or awareness. In 1999, for example, Doris Haddock, who was 89 at the time, walked across the US to raise awareness for political campaign finance reform. Nick Delle Valle, who says that Jesus Christ inspired him to ‘do something together’, has walked across the USA three times pursuing Christian evangelism, while dressed as the Biblical tax collector, Zacchaeus. 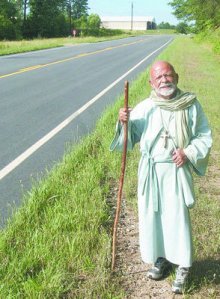 Alex Hrebin’s page makes no mention of any reason for his journey, leaving us to assume he is walking for no other purpose other than a sense of wanderlust and a lack of anything better to do. (Note: We have learned that Alex is walking as a promise to a friend, Dustin Merunka, who passed away shortly after the two made pact to walk across America.) While we admire people like Mr Hrebin who head in the direction where the road takes them, we must remember others who have attempted similar expeditions with sad outcomes. 42-year old Richard Swanson recently attempted to walk from Seattle, WA to Brazil, while dribbling a soccer ball, aiming to arrive in time for the Soccer World Cup of 2014. Sadly, he only got as far as Lincoln, Oregon, before he was run over by a truck in what appears to be a tragic accident. We wish Alex a happier end to his travels. Stay safe Alex, and keep on walking!

Have you or someone you know walked across the USA? Let us know in the comments!

This entry was posted in People, Walking. Bookmark the permalink.

3 Responses to Meet The New Jersey Guy Trying To Walk Across the USA!