Posted on May 9, 2013 by walkableprinceton 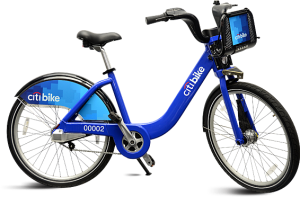 Many years in the coming, New York’s Citibike bikeshare program is finally launching. Similar to the Capital Bikeshare program that has existed in Washington DC since 2010 (and also similar programs in Montreal, Paris and London), the scheme allows users an economical way to borrow a somewhat clunky but surprisingly resilient bike for short trips between designated stations.

Bikeshare programs are an absolutely fantastic way to allow people to replace short car journeys with cycling, an emissions-free form of transport that also keeps you fit and healthy. It would be brilliant if we could get bikeshare going in Princeton. Our small town  lends itself to quick journeys by bicycle, and evidence shows that having more cyclists in the streets reduces the risk for other cyclists. (This ‘Safety In Numbers’ effect is thought to arise because in areas where there are more cyclists, car drivers expect cyclists, and modify their driving behavior accordingly.)

However, despite the benefits of cycling, and the fact that bikeshare may even increase their property prices, many New Yorkers are kicking up a huge fuss about the arrival of Citibike. Public meetings packed with opponents, complaints about how it won’t fit in with the neighborhood, and the inevitable court cases represent the response of certain residents to the arrival of something new. We shouldn’t be surprised. Angry opposition was also seen in Washington DC when Capital Bikeshare launched there. One public meeting in DC descended into obscenity, violence and tears:

In the hallway immediately after the meeting, Steve got in an argument with a man named Tom over the bike station. Steve told Tom, a more formidable-looking man, to “go ****” himself. Tom, in an act that his wife later said was totally uncharacteristic, got in Steve’s face and shoved him. Then Tom’s wife started crying inconsolably…Tom’s wife sobbed, “Why is everybody so mad about this? Why is everybody so crazy?”

In Washington DC today, there is virtually no opposition to bikeshare. The Capital Bikeshare program has been so popular that it struggles to keep up with demand. Opposition in New York is also likely to evaporate after the scheme starts. As one commenter put it, “[Bikeshare] stations are going to be about as newsworthy as bus shelters”. New York is a special city, but bikeshare has been successful in plenty of other big cities, including London, a town not known for being easy to get around. We’re confident that bikeshare will be a success in New York, and we look forward to  the day when it comes to Princeton too!

This entry was posted in Biking. Bookmark the permalink.